Martin Hägglund’s This Life has won the René Wellek Prize

Martin Hägglund’s book This Life: Secular Faith and Spiritual Freedom has won the René Wellek Prize for the best book in the field by the American Comparative Literature Association. Winners of this award include Umberto Eco and Edward Said.

The awards committee in their citation offered high praise for This Life:

“Martin Hägglund’s This Life: Secular Faith and Spiritual Freedom is unclassifiable. A work of great critical ambition that confronts religion and capitalism, freedom and mortality, threats on the planet, and the history of the left, it projects itself as a bold secular sermon and posits a radical morality for our times. Readers cannot remain indifferent: the notion of secular faith here presented will ruffle many feathers across the political spectrum. It is a work of literary criticism, with readings of Dante, Proust, and Knausgaard, and it is a work of philosophy, with readings of Augustine and Kierkegaard inspired by an original interpretation of Heidegger and, at its heart, it is a new thinking of existence in time. It is simultaneously a radical (and practical) case for democratic socialism, arrived at by a powerful juxtaposition of Karl Marx and Martin Luther King, Jr. It is also a work of what is sometimes called wisdom literature, speaking as it does with extraordinary directness and success to the general reader about the ever-timely question of how to live. It is a book against which alternative life projections must be measured. Balancing its bold universalism with a case in favor of modesty and sensitivity to the finitude of all human identities and projects, This Life is absolutely unique.” 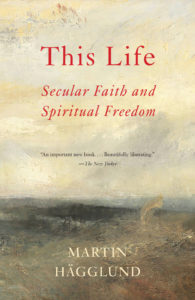 This Life offers a profoundly inspiring basis for transforming our lives, demonstrating that our commitment to freedom and democracy should lead us to cultivate not a religious faith in eternity but a secular faith devoted to our finite life together. Engaging with great philosophers from Aristotle to Hegel and Marx, literary writers from Dante to Proust and Knausgaard, political economists from Mill to Keynes and Hayek, and religious thinkers from Augustine to Kierkegaard and Martin Luther King, Jr., Hägglund points the way to an emancipated life.

“A splendid primer on the importance of authentic freedom.”  —Yanis Varoufakis,