By Martin J. Sherwin The Cuban Missile Crisis ended peacefully because neither President John Kennedy nor Premier Nikita Khrushchev wanted a war. It ended peacefully because Fidel Castro frightened Khrushchev into believing that the United States was about to start a war. It ended without a war because America’s ambassador to the United Nations, Adlai 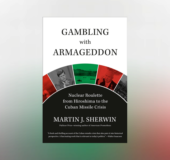