As announced last week, Margaret Atwood will write a sequel to The Handmaid’s Tale, due to publish in hardcover and as an ebook on September 10, 2019.   Her new book The Testaments* is set 15 years after Offred’s final scene in The Handmaid’s Tale and is narrated by three female characters. Atwood made a 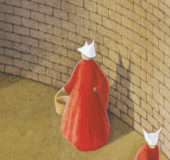