This year is the 50th Anniversary of the Watergate Scandal, when Richard Nixon and his administration tried to cover up the break-in of the Democratic National Committee headquarters at the Washington D.C. Watergate Building. We’re sharing a few books about the history of the scandal and Richard Nixon, a key player in the cover up. 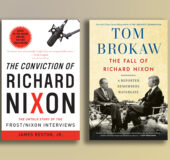 The 50th Anniversary of the Watergate Scandal