The 21st century began optimistically in Latin America. Left-leaning leaders armed with programs to reduce poverty and reclaim national wealth were seeing results—but as the aughts gave way to the teens, they began to fall like dominos. Where did the dreams of this “pink tide” go? Look no further than the original culprits of Latin 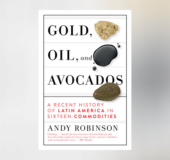 Read an Excerpt from Andy Robinson’s Gold, Oil, and Avocados