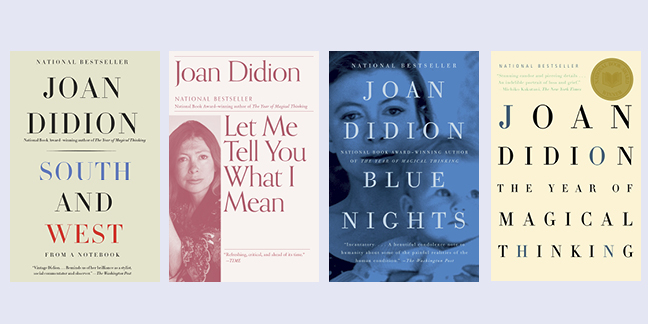 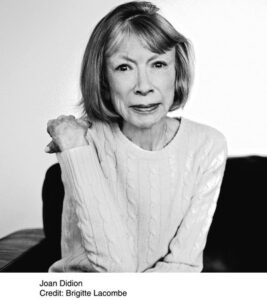 Joan Didion, who passed away on December 23, 2021, was one of the country’s most trenchant writers and astute observers. Her works of fiction, commentary, and memoir have received numerous honors and are considered modern classics.

Parul Sehgal described the prolific writer as “preoccupied with, and troubled by, mythos—of youth, of America’s founding, of social movements, of the ’60s—and preternaturally gifted at fashioning her own.”

Hilton Als stated that her genius “lay in her ability to combine the specific and the sweeping in a single paragraph, to understand that the details of why we hurt and alienate one another based on skin color, sex, class, fame, or politics are also what make us American.”

Molly Fischer described her as an “observer, surveying human folly from a deliberate distance, amazed and not amazed by what she saw.”

Others praised her for encapsulating California and writing in a way that helped define and shape their own experiences.

William Grimes described her legacy as capturing the state and “its harshness and beauty, its role as a magnet for restless settlers, its golden promise and rapidly vanishing past, and its power as a cultural laboratory.”

And Darryl Pinckney said of her and her writing: “The reflections she proposed came together from patient, impartial seeming scrutiny of the language people expressed themselves in, of what we, noisome society, meant, consciously and otherwise. The detachment of the observer guarded against the kind of disillusion that brings writer’s block, modest expectations of human behavior being self-protective as well as philosophical. But for a writer associated with control, manipulation, coolness of voice, Didion’s work is full of feeling.”

We remember her and the literature she brought to the world, using her own experience to analyze and critique society on a larger scale, and enticing readers in the process.

Didion was born in Sacramento in 1934 and graduated from the University of California, Berkeley, in 1956. After graduation, Didion moved to New York and began working for Vogue, which led to her career as a journalist and writer. Didion published her first novel, Run River, in 1963.

It was in New York that Didion met John Gregory Dunne. The two married in 1964 and moved to California. They adopted a daughter, Quintana Roo, in 1967.

In 2005, Didion was awarded the American Academy of Arts and Letters Gold Medal in Belles Letters and Criticism. In 2007, she was awarded the National Book Foundation’s Medal for Distinguished Contribution to American Letters. A portion of National Book Foundation citation read: “An incisive observer of American politics and culture for more than forty-five years, Didion’s distinctive blend of spare, elegant prose and fierce intelligence has earned her books a place in the canon of American literature as well as the admiration of generations of writers and journalists.” In 2013, she was awarded a National Medal of Arts and Humanities by President Barack Obama, as well as the PEN Center USA’s Lifetime Achievement Award.

Shelley Wanger, her editor at Knopf, said, “Joan was a brilliant observer and listener, a wise and subtle teller of truths about our present and future. She was fierce and fearless in her reporting. Her writing is timeless and powerful, and her prose has influenced millions. She was a close and longtime friend, loved by many, including those of us who worked with her at Knopf. We will mourn her death but celebrate her life, knowing that her work will inspire generations of readers and writers to come.”

Some of her notable works include:

Let Me Tell You What I Mean

These pieces from 1968 to 2000, never before gathered together, offer an illuminating glimpse into the mind and process of a legendary figure. They showcase Joan Didion’s incisive reporting, her empathetic gaze

The Year of Magical Thinking

Winner of the National Book Award and Nominated for the National Book Critics Circle Award, this is a timeless collection that reveals what would become Joan Didion’s subjects, including the press, politics, California robber barons, women, and her own self-doubt.

Blue Nights is a work of stunning frankness about losing a daughter. As she reflects on her daughter’s life and on her role as a parent, Didion grapples with the candid questions that all parents face, and contemplates her age, something she finds hard to acknowledge, much less accept.

As Didion follows Miami’s drift into a Third World capital, she also locates its position in the secret history of the Cold War. Miami is not just a portrait of a city, but a masterly study of immigration and exile, passion, hypocrisy, and political violence.

South and West includes two extended excerpts from notebooks she kept in the 1970s; read together, they form a piercing view of the American political and cultural landscape. 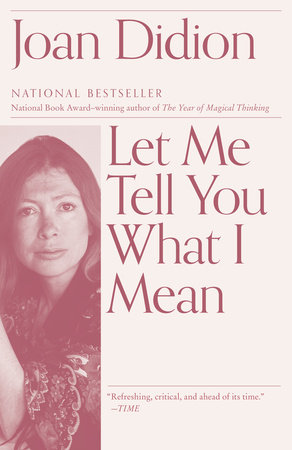 Let Me Tell You What I Mean
Joan Didion
978-0-593-31219-3
From one of our most iconic and influential writers, the award-winning author of The Year of Magical Thinking: a timeless collection that reveals what would become Joan Didion’s subjects, including the press, politics, California robber barons, women, and her own self-doubt.
$16.00 US
Jan 25, 2022
Paperback
192 Pages
Vintage 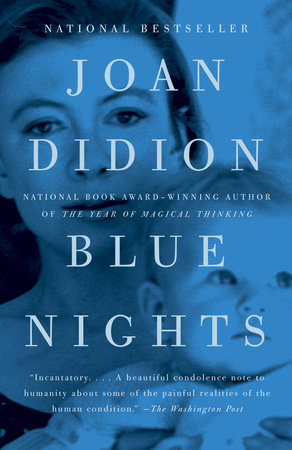 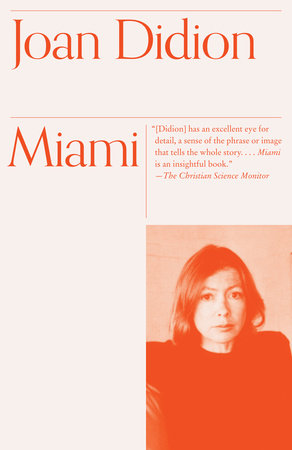 Miami
Joan Didion
978-0-679-78180-6
It is where Fidel Castro raised money to overthrow Batista and where two generations of Castro’s enemies have raised armies to overthrow him, so far without success. It is where the bitter opera of Cuban exile intersects with the cynicism of U.S. foreign policy. It is a city whose skyrocketing murder rate is fueled by the cocaine trade, racial discontent, and an undeclared war on the island ninety miles to the south.
$17.00 US
Sep 29, 1998
Paperback
240 Pages
Vintage 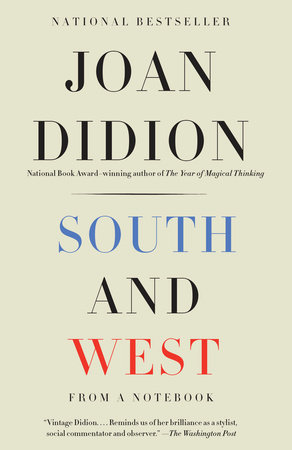 South and West
From a Notebook
Joan Didion
978-0-525-43419-1
The bestseller from the National Book Award-winning author of The Year of Magical Thinking: two notebook excerpts that document two corners of America--the South and the West--during the 1970s, illuminating the cultural divide that led to our current political moment.
$16.00 US
Jan 02, 2018
Paperback
160 Pages
Vintage 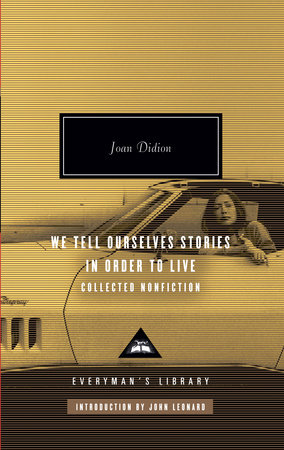 We Tell Ourselves Stories in Order to Live
Collected Nonfiction; Introduction by John Leonard
Joan Didion
978-0-307-26487-9
Joan Didion’s incomparable and distinctive essays and journalism are admired for their acute, incisive observations and their spare, elegant style. Now the seven books of nonfiction that appeared between 1968 and 2003 have been brought together into one thrilling collection.
$40.00 US
Oct 17, 2006
Hardcover
1160 Pages
Everyman's Library 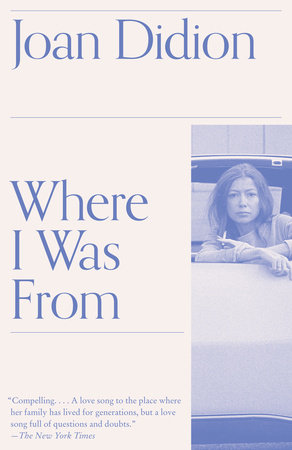 Where I Was From
Joan Didion
978-0-679-75286-8
In this moving and unexpected book, Joan Didion reassesses parts of her life, her work, her history, and ours. Where I Was From, in Didion’s words, “represents an exploration into my own confusions about the place and the way in which I grew up, confusions as much about America as about California, misapprehensions and misunderstandings so much a part of who I became that I can still to this day confront them only obliquely.” The book is a haunting narrative of how her own family moved west with the frontier from the birth of her great-great-great-great-great-grandmother in Virginia in 1766 to the death of her mother on the edge of the Pacific in 2001; of how the wagon-train stories of hardship and abandonment and endurance created a culture in which survival would seem the sole virtue.
$17.00 US
Sep 14, 2004
Paperback
240 Pages
Vintage 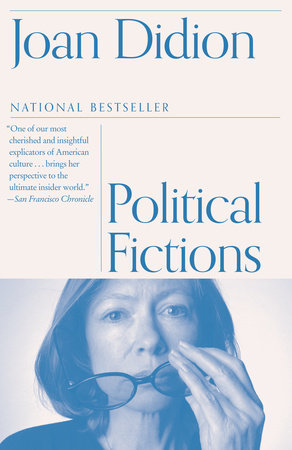 Political Fictions
Joan Didion
978-0-375-71890-8
In 1988, Joan Didion began looking at the American political process for The New York Review of Books. What she found was not a mechanism that offered the nation’s citizens a voice in its affairs but one designed by—and for—“that handful of insiders who invent, year in and year out, the narrative of public life.” The eight pieces collected here from The New York Review build, one on the other, to a stunning whole, a portrait of the American political landscape that tells us, devastatingly, how we got where we are today.
$17.00 US
Aug 27, 2002
Paperback
352 Pages
Vintage

Miami
Joan Didion
978-0-679-78180-6
It is where Fidel Castro raised money to overthrow Batista and where two generations of Castro’s enemies have raised armies to overthrow him, so far without success. It is where the bitter opera of Cuban exile intersects with the cynicism of U.S. foreign policy. It is a city whose skyrocketing murder rate is fueled by the cocaine trade, racial discontent, and an undeclared war on the island ninety miles to the south.
$17.00 US
Sep 29, 1998
Paperback
240 Pages
Vintage 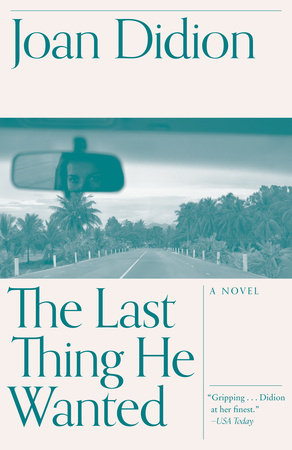 The Last Thing He Wanted
Joan Didion
978-0-679-75285-1
This intricate, fast-paced story, whose many scenes and details fit together like so many pieces of a jigsaw puzzle, is Didion’s incisive and chilling look at a modern world where things are not working as they should and where the oblique and official language is as sinister as the events it is covering up.
$17.00 US
Sep 02, 1997
Paperback
240 Pages
Vintage 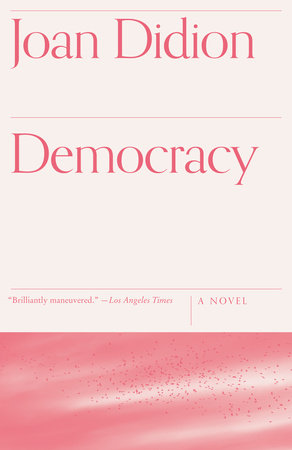 Democracy
Joan Didion
978-0-679-75485-5
Inez Victor knows that the major casualty of the political life is memory. But the people around Inez have made careers out of losing track. Her senator husband wants to forget the failure of his last bid for the presidency. Her husband’s handler would like the press to forget that Inez’s father is a murderer. And, in 1975, the year in which much of this bitterly funny novel is set, America is doing its best to lose track of its one-time client, the lethally hemorrhaging republic of South Vietnam.
$17.00 US
Apr 25, 1995
Paperback
240 Pages
Vintage 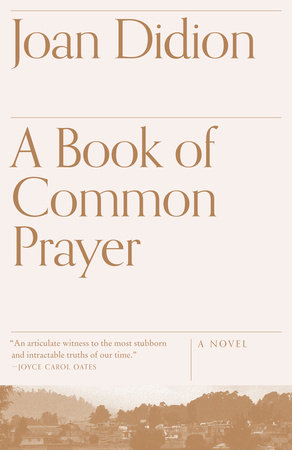 A Book of Common Prayer
Joan Didion
978-0-679-75486-2
Writing with the telegraphic swiftness and microscopic sensitivity that have made her one of our most distinguished journalists, Joan Didion creates a shimmering novel of innocence and evil.
$17.00 US
Apr 11, 1995
Paperback
272 Pages
Vintage 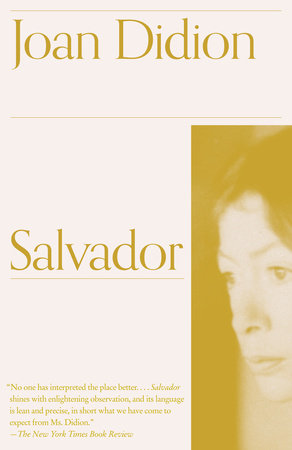 Salvador
Joan Didion
978-0-679-75183-0
Didion turns her powers of observation to El Salvador in the early 1980s, delivering a devastating anatomy of that country’s particular brand of terror—its mechanisms, rationales, and its intimate relation to our own country’s foreign policy. As Didion travels from battlefields to body dumps; interviews a puppet president; and considers the distinctly Salvadoran grammar of the verb “to disappear,” Didion performs the stations of a country’s martyrdom. Her alertness extends from the warning click of firearms along a fashionable street to the tortuous efforts with which American embassy personnel tried to “sell” Salvador’s murderous regime. The result is a controlled yet blistering work, horribly germane to any country in which bloodshed has become a standard tool of politics.
$16.00 US
Apr 26, 1994
Paperback
112 Pages
Vintage 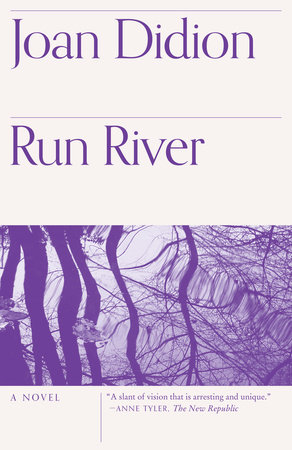 Run River
Joan Didion
978-0-679-75250-9
Joan Didion’s electrifying first novel begins with a murder on the bank of the Sacramento River—a murder that is at once an act of vengeance and a blind attempt to shore up a disintegrating marriage. Out of that act, Didion constructs a tragic and beautifully nuanced work of fiction.
$17.00 US
Apr 26, 1994
Paperback
272 Pages
Vintage 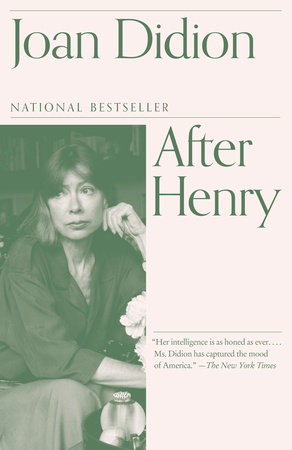 After Henry
Joan Didion
978-0-679-74539-6
In her latest forays into the American scene, Didion covers ground from Washington and New York to California, uncovering the mythic narratives that elude other observers. She examines the fantasies the media constructs around crime victims and presidential candidates; she offers new interpretations of the stories of Nancy Reagan and Patty Hearst; and she regards the racial battlefields of New York's criminal courts.
$17.00 US
Apr 27, 1993
Paperback
320 Pages
Vintage
Tags: Joan Didion
Related articles