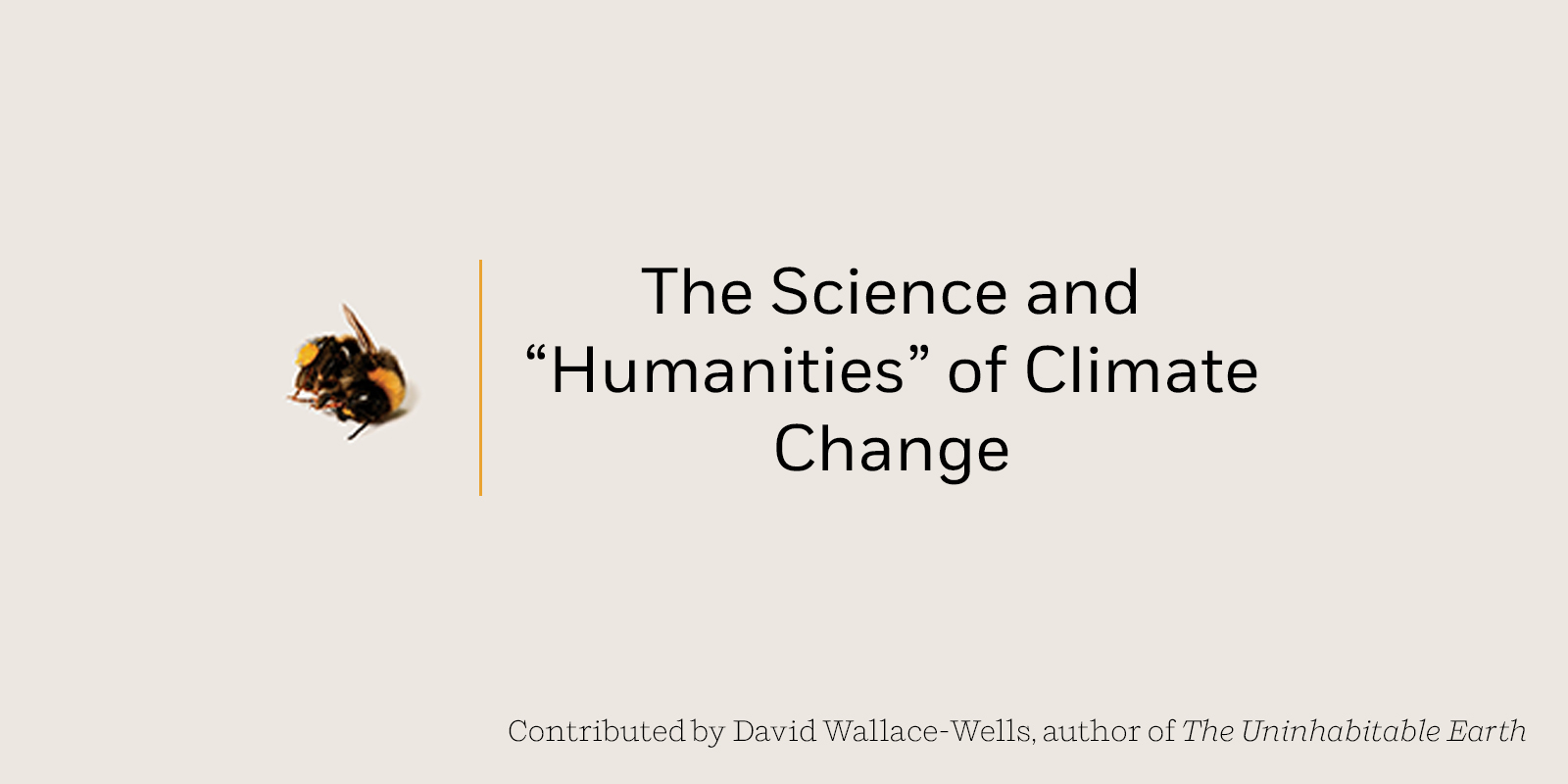 David Wallace-Wells on the Science and “Humanities” of Climate Change

Contributed by David Wallace-Wells, author of The Uninhabitable Earth

Climate change is not a single subject, or a single story, but the theater in which all human life is now conducted, transforming and reordering nearly every aspect of modern life—our infrastructure and our migration patterns, our cities and our energy systems and our agriculture, our economics and politics and culture as well. There is almost no academic discipline that lies entirely outside the realm of warming, from sociology and political science and history to philosophy and literary theory and international relations. Not to mention, of course, economics.

How bad it gets is still an open question, meaning that the scale of impact is up to us. But not its scope. That has been the biggest revelation, for me, in the years I’ve now spent on the subject: Nearly everything that is broken or brutal about the world today will be made worse by climate change, should we not take action to stop it. And nearly everything that is alluring and vibrant and vital can be made better and brighter, too, through climate action, should we take it. Which suggests the need to think in much more integrated and interdisciplinary ways about the challenge it represents, the changes it heralds, and the manner in which we have and will endeavor to address it.

This is, I think, the great value of The Uninhabitable Earth in an academic setting—it functions as a primer on the science of warming, a readable one even for those unfamiliar, but also opens up in much more expansive directions to those with nonscientific interests, with a series of meditations on what I think of as the “humanities” of climate change. In fact, these are, to my mind, the much more original and engaging contributions of the book, extrapolating from the basis of scientific understanding to considerations of what climate change has already done, and will do, to our storytelling; our politics and geopolitics, which will likely be shaped profoundly in the decades ahead by the crisis; our sense of the virtues and shortcomings of our economic system, which will likely be transformed, as well, at least in some ways, in the decades ahead by its force; our relationship to technology and sense of our place in nature, in history, and in the universe.

That may sound a bit abstract, but the classroom logic is, I think, the opposite: an opportunity to connect the academic subjects that may seem abstract at first to the issue today’s college students find most politically pressing. And since climate change touches on everything already today, no matter your subject or area of interest, it should be integrated into discussions of the field. If you study and care about economic growth and poverty, well, warming has already deprived nations of the developing world of as much as a quarter of potential economic growth over recent decades and promises, by the end of the century, an economic dampening perhaps twice as deep as the Great Depression, and permanent. How our present economic system, and political economy, responds to that disruption is a subject for expansive debate. If you study and care about inequities and global injustice, climate change is a vital aspect of those stories, as well, promising to punish most those with the least, who are indeed already suffering, with global inequality already 25% worse than it would be without climate change. If you study and care about conflict, scientists have promised that warming will bring at least a doubling of warfare, by the end of the century. If you study and care about international politics and great power rivalry, that will be the stage on which climate negotiations are conducted, and if you care about domestic politics you need only look at the migration crises that have scrambled both European and American politics over the last decade to imagine the much greater impact that a much bigger refugee crisis could have—the UN says to expect at least 200 million climate migrants by 2050. If you study and care about cultural narratives that govern life in the U.S. and Europe, climate change poses very basic questions to the story of progress and liberalization we’ve told ourselves over centuries, as it does to the imperative of economic growth that has governed most cultural and social and political activity in the west over the last century. And it raises public health questions, with mosquitoes that were always confined to the tropics carrying malaria and dengue as far north as the arctic circle as soon as 2050, and the impacts of fossil-fuel pollution killing millions now annually and affecting many more.

In each of these areas, we are just beginning to peak out from our bubbles of complacency to reckon with what changes are likely to come—and what it will mean for every aspect of human life on this planet. The questions are profound, dizzying. The Uninhabitable Earth can be, I hope, a guide to them.