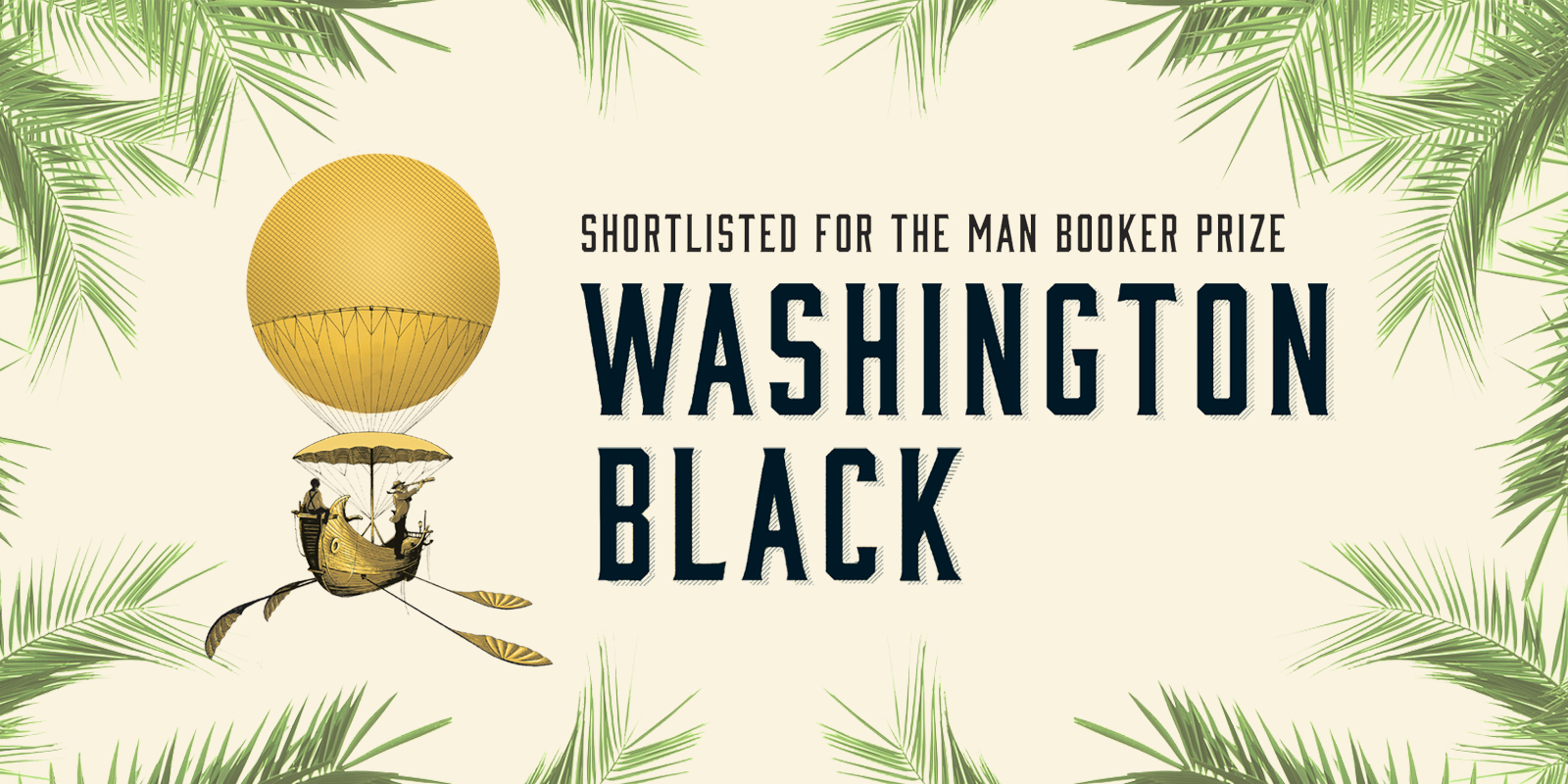 FROM THE PAGE: Washington Black

Washington Black follows “Wash” Black, an eleven-year-old field slave on a sugar plantation in Barbados. When Wash’s old master dies, the plantation’s already dire living conditions immediately worsen. Wash is then selected to become a manservant to his new master’s brother, a man who, as it turns out, is not only an abolitionist, but an inventor, explorer—and owner of a flying machine that can take the two of them away from Barbados.

The following excerpt from Washington Black describes life on the plantation after the new master takes over.

Faith itself darkened under our new master. In the second week, he dismissed the old overseers. In their place arrived rough men from the docks, tattooed, red-faced, grimacing at the heat. These were ex-soldiers or old slavers or just island poor, with their papers crushed into a pocket and the sunken eyes of devils. Then the maim­ings began. What use could we be, injured so? I saw men limp into the fields, blood streaming down their legs; I saw women with blood-soaked bandages over their ears. Edward had his tongue cut out for backtalk; Elizabeth was forced to eat from a full chamber pot for not cleaning the previous day’s thoroughly. James tried to run away, and to make an example of him, the master had an overseer burn him alive as we watched. Afterwards, in the embers of his pyre, an iron was heated and we filed past the charred horror of him, one by one, and were branded a second time.

James’s was the first of the new killings; other killings followed. Sick men were whipped to shreds or hanged above the fields or shot. I was still a boy, and cried at night. But with each new death Big Kit only grunted in grim satisfaction, her orange eyes narrowed and fierce.

Death was a door. I think that is what she wished me to under­stand. She did not fear it. She was of an ancient faith rooted in the high river lands of Africa, and in that faith the dead were reborn, whole, back in their homelands, to walk again free. That was the idea that had come to her with the man in white, like a thread of poison poured into a well.

One night she told me of her intention. She said we would do it quickly. It would not hurt.

“Do it frighten you?” she whispered, where we lay in the hut. “To be dying?”

“Not if it don’t frighten you,” I said bravely. I could feel her arm draped protectively over me in the dark.

She grunted, a long, dark rumble in her chest. “If you dead, you wake up again in your homeland. You wake up free.” I made a little shrug of one shoulder at that, and she felt it, and turned my chin with her fingers. “What is it, now?” she asked. “You don’t believe?”

I did not want to tell her; I feared she would be angry. But then I whispered, “I don’t have a homeland, Kit. My homeland here. So I wake up here, again, a slave? Except you won’t be here?”

“You come with me to Dahomey,” she murmured firmly. “That how it works.”

“Did you ever see them? The dead, waked up? When you in Dahomey?”

“I saw them,” she whispered. “We all saw them. We knew what they were.”

“And they were happy?”

I could feel the day’s exhaustion descending on me. “What it like, Kit? Free?”

I felt her shift in the dirt, and then she was gathering me in close, her hot breath at my ear. “Oh, child, it like nothing in this world. When you free, you can do anything.”

“You go wherever it is you wanting?”

I closed my heavy eyes, wondering. “Is really so?”

She kissed my hair just behind my ear. “Mm hm. You just set down the shovel, and you go.”

Why, then, did she delay? The days passed; Faith grew harsher, more brutal; still she did not kill us. Some presentiment, some warn­ing perhaps, stayed her hand.

One evening she led me out into her little vegetable garden, where we were alone. I saw the sharp, rusted blade of a hoe in her hands, and started to tremble. But she only wished to show me the little carrots beginning to sprout. Another night, she woke me and led me silently out into the darkness, through the long grasses to the dead palm tree, but this too was only to instruct me not to speak of our intentions. “If any hear it, child, we be separated true,” she hissed. I did not understand why we waited. I wanted to see her homeland, I told her. I wanted to walk in Dahomey with her, free.

“But it must be done right, child,” she whispered to me. “Under a right moon. With right words. The gods cannot be summoned otherwise.”

But then the other suicides began. Cosimo cut his own throat with an axe, Adam punctured his wrists using a nail stolen from the smithy. Both were found bled out in the grass behind the huts, one after the other, in the mornings. They were old Saltwaters, like Kit, believers that they would be reincarnated in their ancestral lands. But when young William, who had been born on the plantation, hanged himself in the laundry, Erasmus Wilde himself came out among us.

He walked slowly over the lawns in his dazzling white clothes, an overseer trailing a few steps behind. The overseer wore a tattered straw hat and was pushing a wheelbarrow. The cradle of the barrow held a wooden post, a tangle of grey sacking. They crossed the grass in the harsh sun, pausing just at the edge of the cane, where we had been assembled. In the hot, bright air, the new master studied us.

I could see the flesh on his face and hands, waxen and bloodless. His lips were pink, his eyes a very piercing blue. Slowly he walked the line of our bodies, staring at each of us in turn. I could hear Big Kit breathing roughly above me and I understood she too was fright­ened. When the master looked at me, I felt the scorch of his gaze and lowered my eyes at once, shivering. The air was stagnant, redolent of sweat.

Then the man in white gestured behind him, to the overseer. That man twisted the handles of the barrow, dumping its load in the dirt.

Sprawled there in the dirt, in a heap of grey clothes, was Wil­liam’s corpse. His face was a rictus of pain, his eyes bulging, his tongue black and protruding. Some days had passed since his death, and strange things were happening already to his body. He looked corpu­lent, bloated; his skin had become mottled and spongy. A slow horror filled me.

The master’s voice, when at last he called out to us, was calm, dry, bored.

“What you see here, this nigger, killed himself,” Erasmus Wilde said. “He was my slave, and he has killed himself. He has therefore stolen from me. He is a thief.” He paused, folded his hands at the small of his back. “I understand that some of you believe you will be reborn in your homelands when you die.” He looked as though he might say more, but then he fell silent and, turning abruptly, gestured to the overseer at the barrow.

That man crouched over the body with a large curved skinner’s knife. He reached around and cupped his callused palm under Wil­liam’s chin and began to saw. We heard the terrible wet flesh tearing, the crunch of the bones, saw the weird, lifeless sag of William’s body as the head came away.

The overseer stood and raised the severed head in both hands. Then he walked back to the barrow and took out the long wooden post. Hammering it into the dry earth, he drove William’s head onto the sharp end.

“No man can be reborn without his head,” the master called out. “I will do this to each and every new suicide. Mark me. None of you will ever see your countries again if you continue to kill yourselves. Let your deaths come naturally.”

I stared up at Kit. She was peering at William’s head on its spike, the bulge of its softening flesh in the sun, and there was something in her face I had not seen in her before.

Copyright © 2018 by Esi Edugyan. All rights reserved. No part of this excerpt may be reproduced or reprinted without permission in writing from the publisher.

Learn more about Washington Black by clicking the link below: 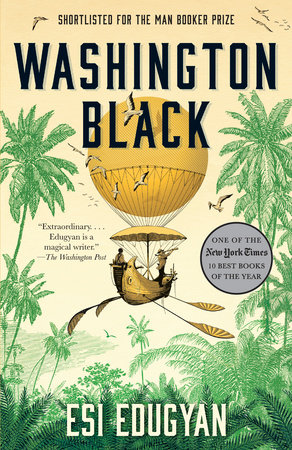