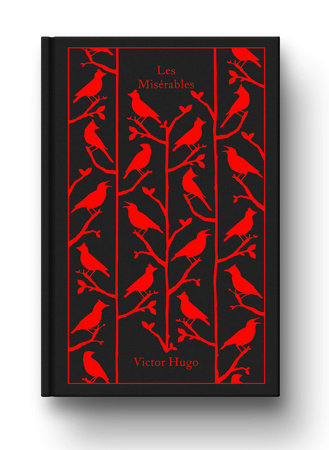 Now a major musical film from Oscar-winning director Tom Hooper (The King's Speech), starring Hugh Jackman, Russell Crowe and Anne Hathaway, and also featuring Amanda Seyfreid, Helena Bonham-Carter and Sacha Baron-Cohen, Victor Hugo's Les Misérables is one of the great works of western literature. Victor Hugo's tale of injustice, heroism and love follows the fortunes of Jean Valjean (Hugh Jackman), an escaped convict determined to put his criminal past behind him. But his attempts to become a respected member of the community are constantly put under threat: by his own conscience, when, owing to a case of mistaken identity, another man is arrested in his place; and by the relentless investigations of the dogged Inspector Javert (Russell Crowe). It is not simply for himself that Valjean must stay free, however, for he has sworn to protect the baby daughter of Fantine (Anne Hathaway), driven to prostitution by poverty. Victor Hugo (1802-85) wrote volumes of criticism, Romantic costume dramas, satirical verse and political journalism but is best remembered for his novels, especially Notre-Dame de Paris (1831), also known as The Hunchback of Notre-Dame and Les Misérables (1862) which was adapted into one of the most successful musicals of all time. 'All human life is here' Cameron Mackintosh, producer of the musical Les Misérables 'One of the half-dozen greatest novels of the world' Upton Sinclair 'A great writer - inventive, witty, sly, innovatory' A. S. Byatt, author of Possession

Victor Hugo (1802–1885), novelist, poet, playwright, and French national icon, is best known for two of today’s most popular world classics: Les Misérables and The Hunchback of Notre-Dame, as well as other works, including The Toilers of the Sea and The Man Who Laughs. Hugo was elected to the Académie Française in 1841. As a statesman, he was named a Peer of France in 1845. He served in France’s National Assemblies in the Second Republic formed after the 1848 revolution, and in 1851 went into self-imposed exile upon the ascendance of Napoleon III, who restored France’s government to authoritarian rule. Hugo returned to France in 1870, after the proclamation of the Third Republic. View titles by Victor Hugo
Coralie Bickford-Smith is an award-winning designer at Penguin Books, where she has created several highly acclaimed series designs. She studied typography at Reading University and lives in London. View titles by Coralie Bickford-Smith