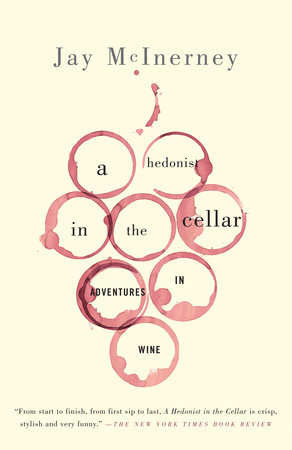 A Hedonist in the Cellar

Author Jay McInerney
Look inside
Paperback
$15.95 US
Knopf | Vintage
On sale Nov 06, 2007 | 272 Pages | 978-1-4000-9637-4
Add to cart Add to list Exam Copies
See Additional Formats
In A Hedonist in the Cellar, Jay McInerney gathers more than five years’ worth of essays and continues his exploration of what’s new, what’s enduring, and what’s surprising–giving his palate a complete workout and the reader an indispensable, idiosyncratic guide to a world of almost infinite variety. Filled with delights oenophiles everywhere will savor, this is a collection driven not only by wine itself but also the people who make it.

In A Hedonist in the Cellar, Jay McInerney gathers more than five years’ worth of essays and continues his exploration of what’s new, what’s enduring, and what’s surprising–giving his palate a complete workout and the reader an indispensable, idiosyncratic guide to a world of almost infinite variety. Filled with delights oenophiles everywhere will savor, this is a collection driven not only by wine itself but also the people who make it.

An entertaining, irresistible book that is essential for anyone enthralled by the myriad pleasures of wine.

Part Six: Matches Made in HeavenWhat to Drink with ChocolateNot far from the spot where Romeo secretly married Juliet, in the Valpolicella hills overlooking Verona, I discovered a more fortunate and successful match. I had just finished lunch with Stefano Cesari, the dapper proprietor of Brigaldara, in the kitchen of his fourteenth-century farmhouse, and I was trying to decide if it would be incredibly uncouth to ask who made the beautiful heather-toned tweed jacket he was wearing, when he put some dark chocolates from Perugia in front of me and opened a bottle of his 1997 Recioto della Valpolicella. One hesitates to describe any marriage as perfect, but I was deeply impressed with the compatibility of his semisweet, raisiny red and the bittersweet chocolates. Cesari later took me up to the loft of the big barn and showed me the hanging trays where Corvina and Rondinella grapes are dried for several months after harvest, which concentrates the grape sugars and ultimately results in an intense, viscous wine that, like Tawny Port, Brachetto, and a few other vinous oddities, enhances the already heady and inevitably romantic experience of eating chocolate.The Cabernet, Merlot, or Shiraz you drank with your steak may get along well with a simple chocolate dessert, especially if the wine is young and the fruit is really ripe, but real chocoholics should check out the dried-grape wines, many of which are fortified—that is, dosed with brandy, in the manner of Port, a process that stops fermentation and leaves residual sugar. "Fortification seems helpful in terms of matching chocolate," says Robert Bohr, the wine director at Cru, in Greenwich Village, which has one of the best wine lists in the country, if not the world. Bohr likes Tawny Port with many chocolate desserts, finding Vintage Port too fruity. (McInerney does too, and advises that some of the best Tawnies come from Australia's Barossa Valley.) But most of all Bohr likes Madeira.If you were to order the Hacienda Concepción chocolate parfait at Cru, Bohr would direct you to a vintage Madeira like the 1968 d'Oliveiras Boal. Madeira has become so unfashionable in the past century that many putative wine lovers have never tasted it, but I'm sensing the stirrings of a cult revival spearheaded by supergeeks like Bohr. The sweeter Malmsey style seems to be best suited to chocolate desserts. And by chocolate, I mean, of course, dark chocolate. Milk chocolate should be consumed only by day, if at all, and accompanied by milk.The cough-syrupy Umbrian passito wine is made in the same fashion as Recioto from the mysterious and sappy Sagrantino grape. These powerful, sweet reds seem to have originated as sacramental wines, and they continue to inspire reverence among a small cult of hedonists, myself among them. This practice of drying grapes goes back thousands of years; there are references to drying wine grapes prior to fermentation in Homer and Hesiod. ("When Orion and Sirius come into mid-heaven," Hesiod advises in Works and Days, "cut off all the grape clusters and bring them home. Show them to the sun for ten days and ten nights.") I like to imagine that these dried-grape wines resemble those that were drunk at Plato's symposium or Caligula's bashes—although chocolate wouldn't appear in Europe until the sixteenth century, Columbus having stumbled upon a stash of cacao beans on his fourth and last voyage to the New World.Two of the finest wines for chocolate, Maury and Banyuls, come from remote Roussillon in France's deep southeast. These so-called vins doux naturels are made (mostly) from late-picked Grenache grown on steep, terraced, wind-scoured hillsides near the Spanish border. The standard-bearing Banyuls estate is Domaine du Mas Blanc, one of the world's most famous obscure domaines. I first tasted this wine at JoJo, Jean-Georges Vongerichten's pioneering New York bistro, alongside the warm Valrhona chocolate cake, a nearly erotic experience that I try to re-create at least once a year. (And I'm a guy who doesn't usually even bother with dessert.)Banyuls's neighboring appellation Maury also produces a chocolate-loving vin doux. The village cooperative makes the classic example; I recently had, alongside Le Bernardin's warm chocolate tart, a 1929 that was spectacular, with lots of caramel, date, coffee, and vanilla flavors, plus an oxidized Sherry note, which the French and Spanish call rancio. The finest estate in Maury is Mas Amiel (which once traded hands in a card game), producers of several cuvées of heady Maury, including one raised in the traditional manner of the region, spending a year outdoors in huge glass demijohns, exposed tothe extremes of the Roussillon climate. The demand for these labor-intensive wines, like that for most sweet wines, has beenstatic in the past few decades (Mas Amiel is increasingly focusing on the production of dry table wines), and prices remain modest when compared with Vintage Port or Sauternes.America's answer to Banyuls and Recioto is late-harvest Zinfandel—a fairly rare, sweet style of Zin that is eminently delicious with chocolate, the darker and more bitter the better. This is a good general rule: chocolate with a high cocoa content and a lower milk and sugar content is the most complex, intense, and wine-friendly. As for the desserts, the more complicated they get, the harder they will be to match. Chocolate already has some five hundred flavor compounds—how many more do you need? A chocolate soufflé is a beautiful thing, but it's hard to improve upon a simple piece of Valrhona, Bernachon, or Scharffen Berger dark chocolate, unless of course you pour a Madeira or a Maury alongside it.
Copyright © 2006 by Jay McInerney. All rights reserved. No part of this excerpt may be reproduced or reprinted without permission in writing from the publisher.

© Michael Lionstar
Jay McInerney is the author of eight novels, two collections of short stories, and three collections of essays on wine. His latest book, Bright, Precious Days, was published in 2016. He lives in New York City and Bridgehampton, New York.  View titles by Jay McInerney 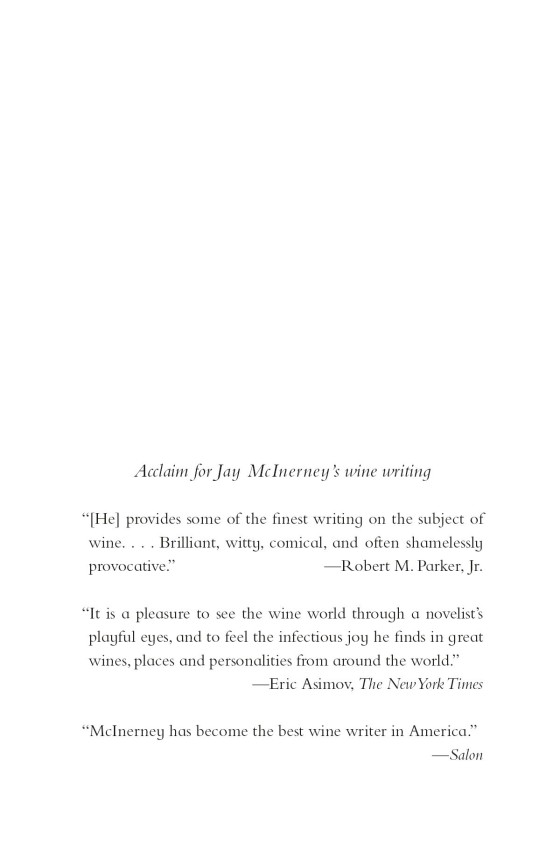 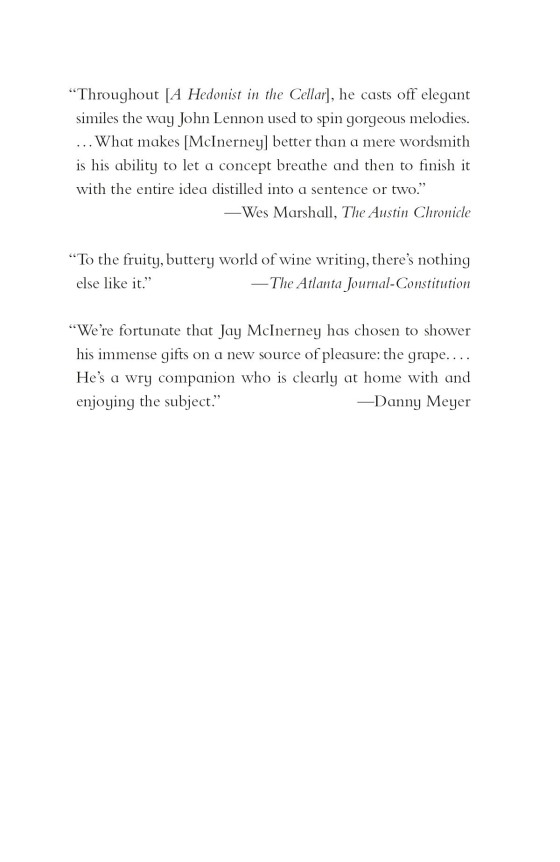 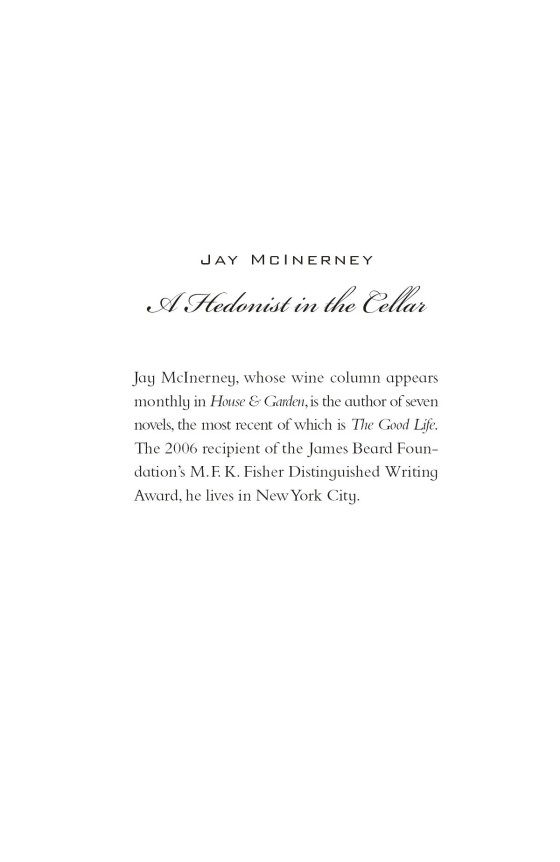 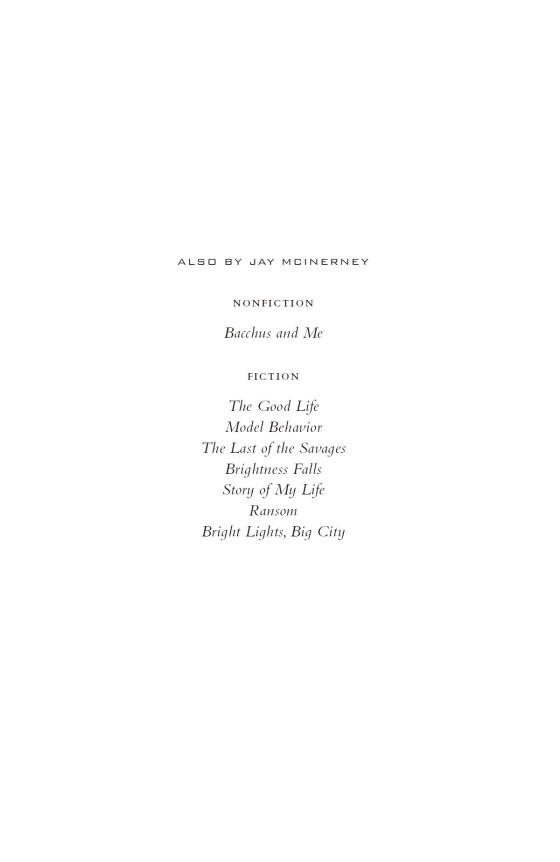 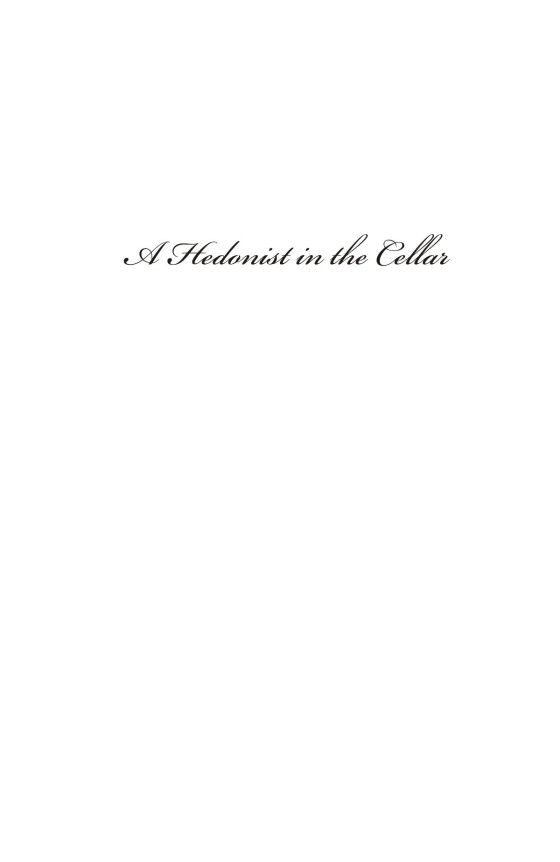 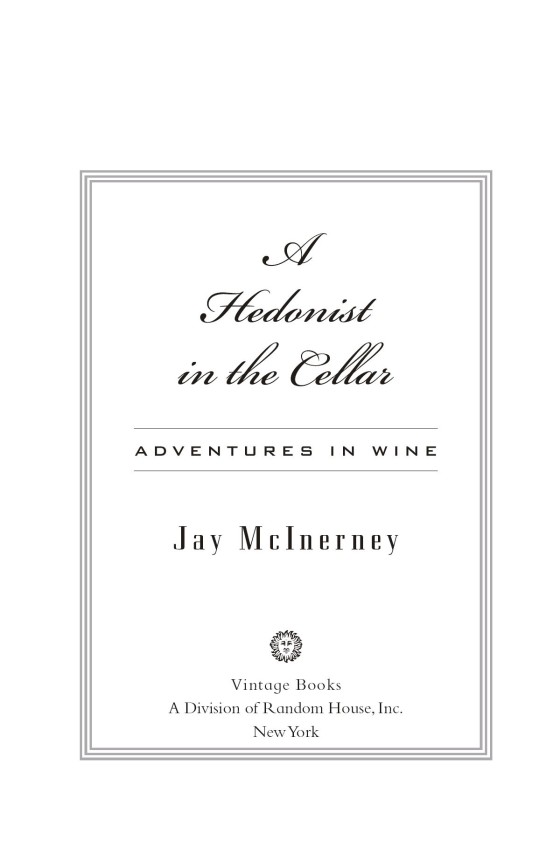 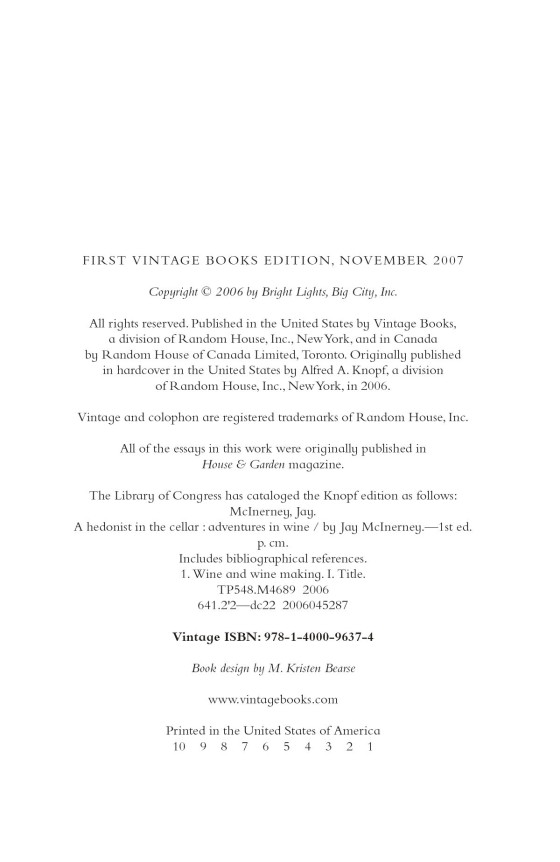 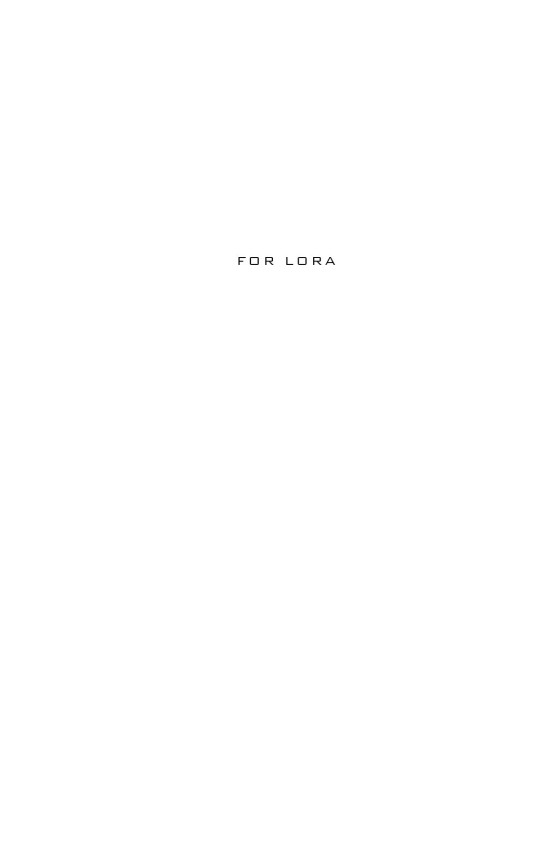 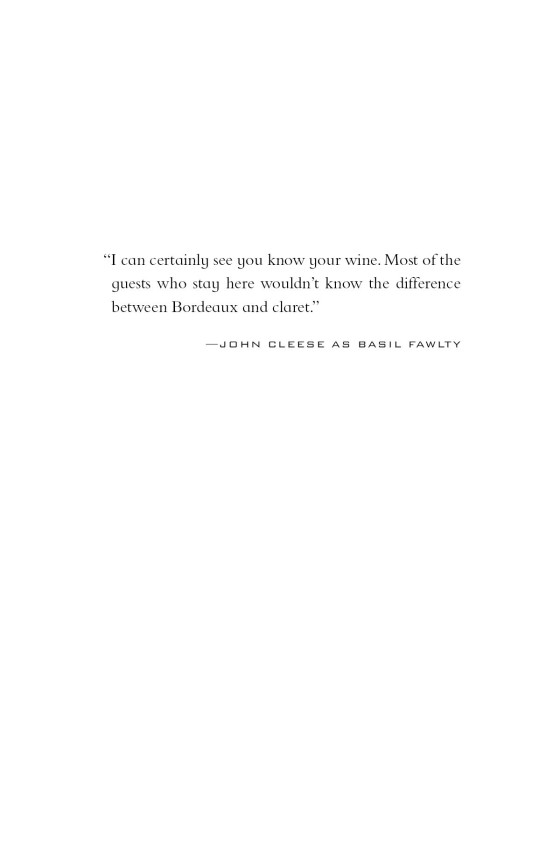 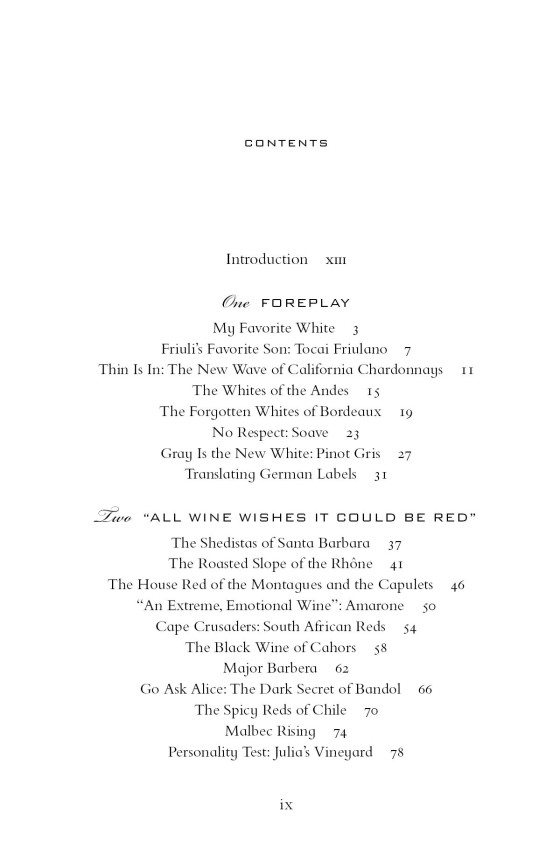 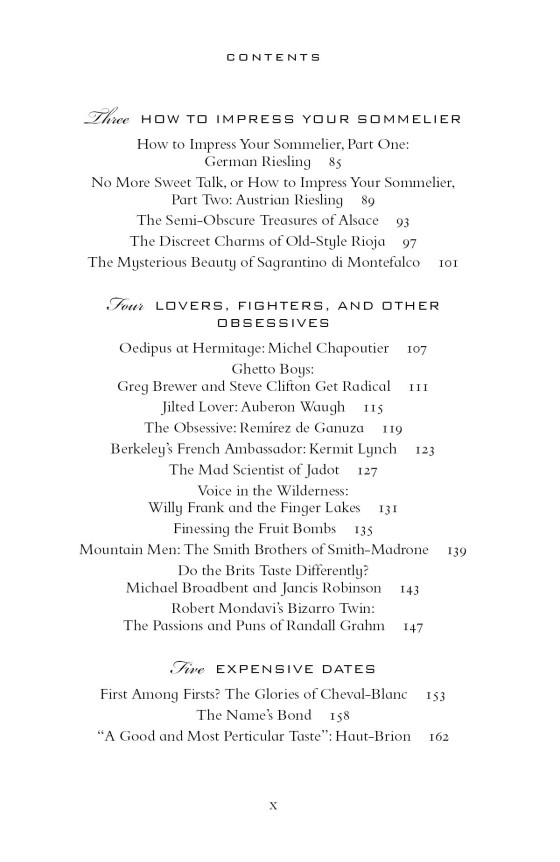 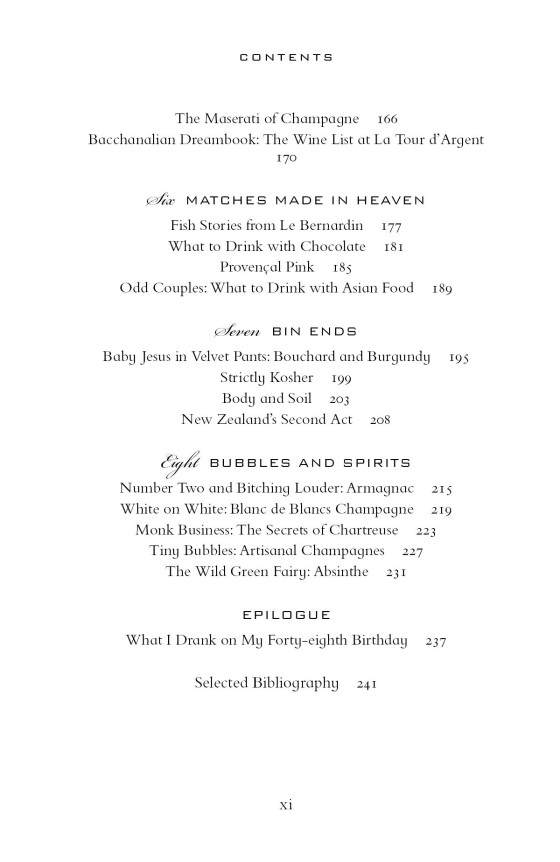 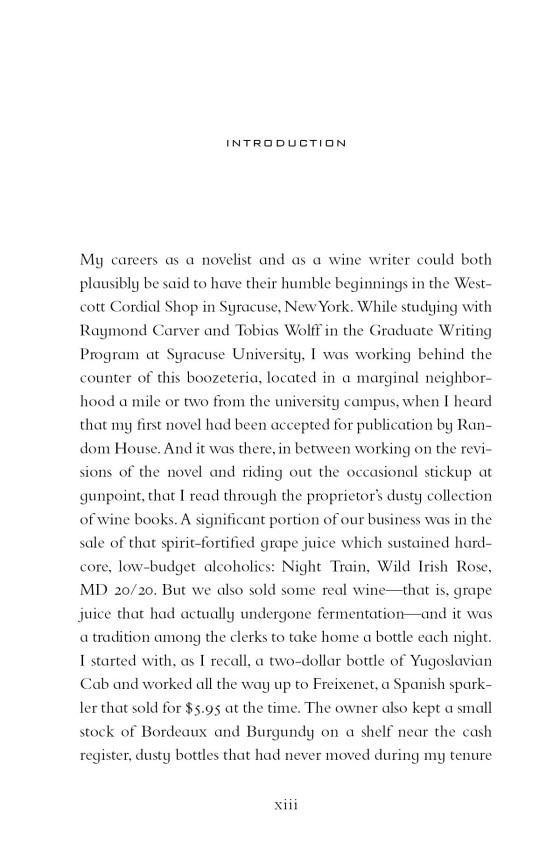 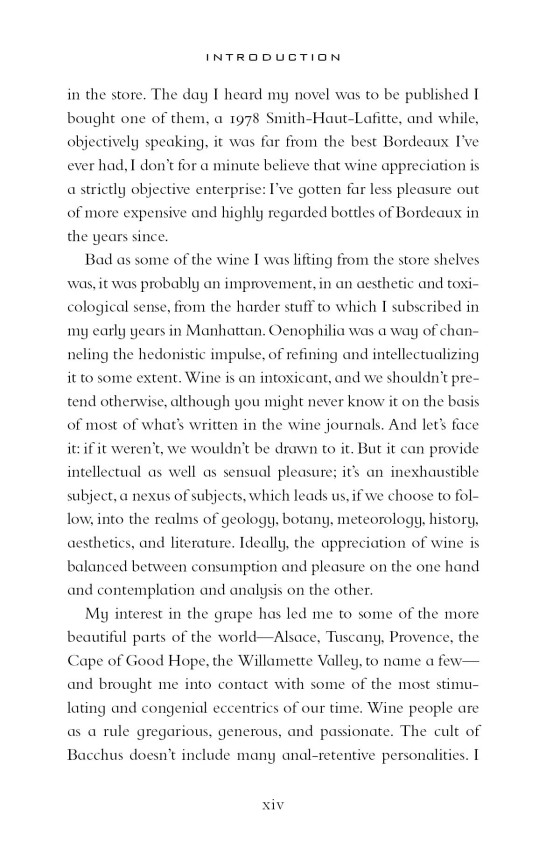